In one of my earliest childhood memories, I am sitting in a circle on the floor listening to a missionary tell us about Africa. She wore a colorful native dress and let us pass around trinkets from that faraway land. I remember very little from her actual talk. But I was enthralled with the thought of a place so vastly different than my home. One of my dreams became to go overseas and share the stories of Jesus among the nations.

Years passed and the tiny seed of a dream grew. It became a calling on my life, like a thread woven into the fabric of every season.

I was twenty-three when I finally set foot on African soil. I bumped down on the runway ready to love every new experience. Reality takes more work than a dream though. In the first few weeks we lived in a thatch-roofed hut. One night, as I slept, rats built a nest in my suitcase. I discovered them when the mother rat jumped over my shoulder as I reached for a shirt. The pink babies tumbled out as I fled the hut. I very seriously considered calling my parents and asking for a flight home that day.

Slowly, the sticky cornmeal mash became tolerable. The wild traffic caused me to panic less. After a few months, I moved to a more solid establishment. Thankfully, it had fewer rodents. Eventually, I served on staff at a care center for abandoned and HIV babies. I witnessed terribly hard things. But I also saw miracles. Babies who’d been thrown into pit latrines were adopted into loving families. Little ones who couldn’t even crawl began to walk.

Fast forward ten years, and I was no longer overseas on a short term trip. My husband and I had been sent by an organization to settle our family in the middle of South Asia, where less than 2% of the population know the teachings of Jesus.

We had two small children, by that point, and my days were far from what I’d envisioned in my starry-eyed youth. It wasn’t the smells or the food that discouraged me, but the discovery that the mundane exists wherever you live.

The daily tasks of motherhood and studying a new language seemed to take all my time and energy. Like many young mothers, my days were primarily spent in the confines of my home. I wanted to be useful in the kingdom of God, but all the basic needs pressing in on me were enough to keep me busy from morning until night. I felt terribly discouraged.

One evening, I very simply poured out my heart to God. I prayed that He would work to make me a blessing to others. I asked Him to bring ministry to me right where I was in that season of life.

Later that week, I was in my house (again) getting ready for dinner, bathing the boys, and calming the chaos. There was a knock on my door. When I opened it, I saw a beautiful young South Asian lady. She lived in our neighborhood and had heard that we were Christians. She wondered if I might have time to study the Bible with her. She’d grown up in a Hindu home and had come to know Christ a couple of years before. She was looking for discipleship and fellowship.

In a season when it was difficult for me to even make it outside of my home, God literally sent her to my door.

That precious sister became a regular in our home. We ate together. We prayed together. She chased my toddlers with me. She later told me that watching our family was shaping in her mind how a Christian home could look.

We have lived overseas for eight years now. My posse has grown to include a few more little people. My days are still primarily consumed with the daily tasks of motherhood.

In the eight years since, I’ve never again had someone knock so boldly on my door. But that night remains in my mind as a reminder of a Father who sees us. He is more than able to answer our prayers to share His love with those around us, whatever our season of life.

Be encouraged by the words of Ephesians 2:10, “For we are God’s handiwork, created in Christ Jesus to do good works, which God has planned in advance for us to do.”

You may feel up to your elbows in dishes and potty training. The Father sees you right where you are. And He already has good works for you to do planned out in advance.

Ask Him to show you. Then be prepared to open the door, for His glory. 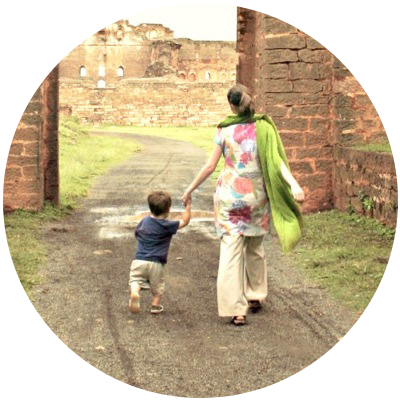 Laura is a Memphis native who's spent nearly a decade living in foreign lands. Her husband teaches the Bible, primarily among South Asians, of whom less than two percent of the population follow Christ. She lived in the land of boy-moms with three rowdy little men for nine years. Recently, their family also welcomed a daughter, whom she invariably dresses in pink and florals. She loves children’s literature, recipes from around the world, and hiking up mountains.