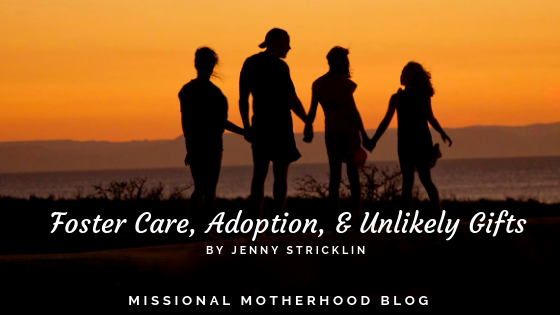 I vividly remember reaching out to touch her for the first time, nearly 19 months ago, my shaking hands evidence of my trembling heart. She was especially fragile because of her unique health concerns, and her tiny 5lb. frame was largely hidden by all the tubes and wires and medical tape.  But as I stood over her tiny bed on that ordinary Wednesday morning, that sterile hospital room became holy ground. There, the tragic collided with the sacred, and there, God reassuringly whispered, “I’m in this.” His voice, a true gift.

We had only just three days before we officially opened our home for foster care … that in itself a huge gift and an initial fulfillment of the work He began in my heart several years before.

I’d prayed for this moment a hundred times over. Not for this specific child, of course. I’d had no clue what the particulars would be… age, race, gender, family history, etc. And to be honest, my prayers hadn’t been born out of a desire to grow my own family or to do something noble, but rather an urgency to cooperate with God in His kingdom agenda here on earth as best as I could understand it. A prayer like that doesn’t come from within us as humans. It can’t. Even the best of us are self-centered, self-protecting, comfort seekers at our core. I sure was. A longing like this MUST have been birthed in the heart of God and then deposited into mine. He loves to give this kind of gift.

A few years prior, God had radically gripped my heart and prompted a surrender that was unprecedented in my life. He totally remodeled my thinking and as a result, I began to sense his calling toward the orphans in foster care. Over time, conviction grew. But in the Lord’s perfect timing, here I was, years later, meeting our first little foster baby. Such a long awaited gift.

In ways that only He could, He whispered (shouted!) confirmations to our hearts as my husband and I took turns sitting with her at the hospital and then as we brought her to our home to join our three sons a week later. And as God’s mysterious ways go, we shocked even ourselves by saying “yes” to her toddler sister joining us six weeks later. By God’s grace, despite the obvious challenges of going from three to five kids almost overnight, BJ, the boys, and I were instantly “all in,” and I remember clearly the unmistakable, Christmas-morning type jitters looking at these precious gifts, and knowing that God was delivering on the promise and prayer He’d put in my heart those years before.

We entered the foster care world expecting to care for kids temporarily during their process of reunification with their biological parents, assuming we would have many come and go along the way. But evidently, God had a different plan. Those two little girls never left our home, and just a couple of weeks ago, we had the privilege of officially adopting them into our family! Quite the unexpected gift!

This journey of fostering and now adopting has been a story of God’s mercy. But not just on two little girls, as you might assume. On ME… a regular girl who got to open one underserved gift after another: the thrills of answered prayer, surrender, God-initiated risk, and of watching Him come through and show off on my behalf. The fact that He gently brings us into His unfolding plan here on earth is BEYOND me.

In fact, when we were praying and asking God whether He would have us open our home, each time He would answer with an affirmation of who HE is or what HE would do: HE is a father to the fatherless. HE sets the lonely in families. HE rescues the needy. HE fights our battles. HE sees each of these precious kids and loves them with an unbreaking, never-ending, unconditional love. HE is the one responsible for and capable of their care. This was our answer. Our role as His followers is to cooperate with HIM and believe HIM as HE does HIS thing. He sees and knows and plans and pursues. HE is our rescuer, our Savior, our Deliverer. He gives the best gifts! He IS the best gift.

So as I reflect back on the last year and a half and cry because of God’s faithfulness, I can say with complete honesty that my family, my kids, my marriage are all the stronger for having walked this path. My husband and I have laughed, cried, and grown closer to the each other and to the Lord. My three sons have loved hard, made sacrifices, and reaped great rewards. And it has gotten me thinking…

Perhaps there is a critical aspect of “missional motherhood” that involves moving outside of the four walls of our little homes and families? Maybe part of teaching our kids to pursue God is by helping them eagerly pursue others. Perhaps helping them truly love God involves giving them opportunity to really love people that He loves. And maybe they’ll learn how to give themselves fully to God by gladly receiving His unlikely gifts along the way!

Oh Lord, thank you for your many gifts! 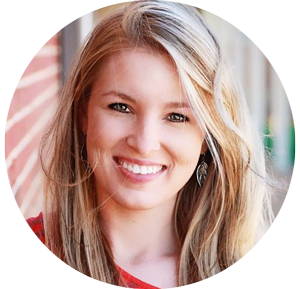 From Little Rock, AR, Jenny Stricklin is a pastor¹s wife and mom of five young kids who is seeking to live out her motherhood calling in a way that honors God and impacts the Kingdom. God has graciously shown her His heart through everyday struggles, foster care, adoption, and parenting a child with special needs. Out of a love and desire for community, she¹s eager to link arms with other moms as they run - and sometimes crawl - toward Jesus in an effort to follow Him in the context of family.